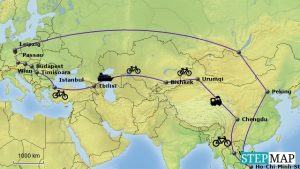 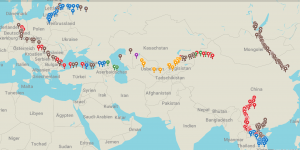 Bike track along the Elster river:

We followed this bike track from Leipzig until Aš (Czech Republic) and we really liked it. It mostly follows the river but also goes through the forest and is rather hilly.

Bike track along the Naab river:

Compared to the track above, this one is rather boring. Due to the proximity of the big highway there is a lot of car noise.

Bike track along the Danube river:

We went on the Romanian side of the river and this is a road with heavy traffic. As there are not many bridges to cross, it is better to go on the Serbian side of the Danube when going trough the Iron Gate.

In general we really appreciated roads in Bulgaria. It was very easy to find small asphalt roads with light traffic. Even the streets that look a little bit bigger on the map are comfortable to ride on. In the beginning we were a little bit scared of climbing the Balkan Mountains, but after all there was no problem at all. The state route 55 in the direction to Гурково (Gurkowo) is easy to pass and there is not much traffic. The Balkan mountains are also very nice for hiking trips. There are many mountain huts where you can sleep and a lot of signs to find the hiking paths. We left our bikes in Априлци (Apriltsi) to climb the Botev Mountain which is the highest peak. (There is also the Great Balkan Trail from Kom to Cape Emine which is about 20-days-hike).

Supposedly, many cyclists take the road 53 to reach the coast. However, we found the way terribly boring.

The side road 99 trough the Странджа Mountains in the south-east was on of my personal favorits. Beautiful mountains, silence and small villages. Although our navigation app told us that it is a gravel road, it was asphalted all the way to the Turkish border.

Riding out of Istanbul was a bit ugly for the first two hours but not as bad as we expected. We just followed the street signs to Şile, which is a little town at the black sea, and it was quite interesting to see the outskirts of Istanbul. From Şile we basically stayed as close to the coast as possible. There are still a few nice beaches, but be careful because there is a huge street building project which destroys a lot of nature and beaches in this area. Sometimes google.maps and maps.me are not up-to-date with the changes of the road and we lost the way a couple of times…

From Ereğli to Samsun:

From Ereğli to Samsun we decided to leave the coast to visit Safranbolu. The section from Ereğli until Devrek is quite steep but doable and worth the effort. The following way passing Karabük and Kastamonu is a it boring but easy to ride because it is less hilly and the road is quite big and not very crowded. From Boyabat via Durağan to Alaçam the road was beautiful again. Scenic views of the river and the mountains, but for a few kilometers the incline was too steep to cycle. However, there were enough cars to hitchhike. Back at the coast, the road was huge and very crowded.

From Samsun to Batumi:

Because we wanted to be close to the Black Sea we decided to take the coastal road again. Despite many blogs reporting about a very crowded highway, we didn’t feel uncomfortable on the highway. On the contrary, we enjoyed riding next to each other on the side lane. Many times you can go around the tunnels on the old road. There you can also find the best places for camping without hearing the noise of the street. Before reaching Ordu it is worth making the detour through Çaytepe and Perşembe.

We took the South route from Batumi to Tbilisi. We liked it a lot and would recommend to take this route instead of the flatter Northern route. Climbing Goderzi Pass was not easy because the asphalt stops around 30km before the pass and only starts again 50km later. Yet, the slopes are manageable and the mountains are beautiful. Besides these 50km, there were asphalt roads and not too many cars. However, riding into Tbilisi wasn’t too much fun as there was a lot of traffic. Even though we didn’t try it, the other road through Manglisi and Kojori looks better.

We entered  Azerbaijan from the border close to Lagodekhi, which was a quiet and relaxed border. Then we followed the road straight to Baku. It was a pleasant route along the mountains, passing a dense beechforest and short section of desert.

The ferry from Azerbaijan to Kazakhstan:

There are quite a few blogs writing about their horrible experience with the Caspian Sea Ferry. As our experience was rather smoothly, I want to make a short note. The port is not in Baku but close to Ələt, which is about 80km south of Baku. The port is in the middle of nowhere but there is a little shop where you can buy everything you need. It is possible to buy the ferry tickets right at the port and there is also an ATM. It is also possible to camp right on the port for free and to use a shower and a toilet. We had to wait for the ferry for 24 hours and all the people we met, didn’t have to wait longer than one night. On the ferry we slept in a double room with toilet and there were also public showers. Food is served three times a day but it was really small portions (-; It is important to know that you cannot buy any additional food or drinks on the ferry; so bring enough water. On the Kazakh side, there is no shop built a cafeteria for the workers. It has funny opening hours but if you are lucky, the food is fresh and nice. We also met some travellers who spent the night camping at the harbour in order to wait for the ferry. The harbour again is about 80km from Aqtau and there are not many shops on the way.

The road from Aqtau to Beyneu is well paved and good to ride as long as the wind of the desert spares you. The road from Beyneu until the border of Uzbekistan is horrible. But construction work was taking place and it looked like the new road could be done soon. In the meanwhile you can sometimes switch with the bike to the new constructed road, which is not open for traffic yet. Even though there are not many villages, there are enough shops and little restaurants on the way to find food every once in a while.

Until Kungrad the desert is quite empty, but afterwards it gets more crowded with little shops. The road was sometimes good and sometimes a bit bumpy until Chiva, but overall nice to ride on. Entering the Fergana Valley over the Kamtchik Pass is a beautiful option to go east. Even though the road over the pass is quite steep for about 15km, it is easy to manage. The tunnels are not too dangerous and the long downhill ride compensates all the struggles. The Fergana Valley is densely inhabited, so it is sometimes a pain in the ass to find a good camping spot. Yet, most of the Chaihanas (Tea houses) have little rooms for eating where you can sleep for free if you eat dinner.